Home › Government › Answered: What has the USA really done for the rest of the world?

Answered: What has the USA really done for the rest of the world?

If you travel at all or have some antagonistic online acquaintances that delight in reminding everyone of the less-than-savory things that America has done to people around the world, you’ve faced the question:  What has the USA ever done that is so great?

Here’s the most cogent and noncontroversial answer.

We gave the world this guy, Norman freaking Borlaug: 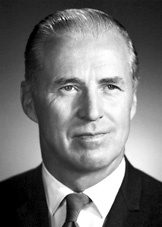 Norman Borlaug can be said, with only a very slight exaggeration, to have saved literally billions of human lives. He is revered in places like India and Mexico, regions that used to be synonymous with famine and starvation. There are countless people alive right now because of Norman Borlaug.

He spearheaded what is known as the Green Revolution of the mid-20th century. Dr. Borlaug brought science to agriculture and successfully introduced new techniques in a vast array of agricultural sub-fields, ultimately bringing a high-yielding short-strawed, disease-resistant wheat to farmers around the world. He introduced new techniques of planting and managing crops and through his work in genetics, plant breeding, and soil science developed better pesticides, crops, and spent most of the rest of his life training scientists in agricultural research and production methods.

If I were a believer I’d say he should be made a saint.  You know anyone else single-minded enough to spend his entire career helping the poorest people on Earth grow more food?

To extend the point of the question: What has America ever done that was so great? The USA has consistently provided the world with smart people dedicated to making the world a better place. Dr. Borlaug may be the best example but he is far from the only one. It’s probably common knowledge that more Americans have been awarded a Nobel than any other nationality (371 as of this writing) but we also have twice as many Nobel Peace laureates than any other country

Norman Borlaug, quite possibly one of the most important men ever to have walked the Earth. Also one of the most gifted and gracious.  More people should know about him, especially if they’re questioning our contributions to the world and its people.  A great American, and a great human being, Norman Borlaug is a genuine hero.

Like Loading...
‹ That time I was asked to run for office and why I said no.
Some advice from The Swamp for the Democrats leading into 2020 ›

This site uses Akismet to reduce spam. Learn how your comment data is processed.

Keep The Swamp full with a donation!

Your donation will help keep The Swamp full of interesting content. - Your grateful Swamp Rats

Sites we waste time on

Everything about Productivity Tips, life and Future.

Stories and photos from Scotland

All knowledges for the curious

Bipartisan dialogue for the politically engaged

The Art and Craft of Blogging

The latest news on WordPress.com and the WordPress community.